The rise of Narendra Modi is a watershed moment in Indian politics. In fact, such is the magnitude of his influence on the country that India’s governance paradigm and political history can be easily divided into two distinct eras—pre-Modi and post-Modi.

His appeal is the result of his work in many domains over a long social, political and administrative career. Modi’s impact is not restricted to India alone, and numerous national and international polls regularly declare that he is the most popular international leader. 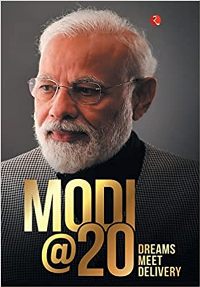 Modi became the chief minister of the Indian state of Gujarat in 2001. He was undefeated in all subsequent elections and became the state’s longest serving chief minister. While Modi strode Gujarat like a colossus, propelling multi-dimensional progress, bigger responsibilities beckoned. Modi’s exemplary success in Gujarat, paved the way for him to be popularly elected India’s prime minister in an overwhelming victory in 2014. He is a prime minister unlike anyone earlier, both in terms of appeal and body of work. As a result, in 2019, he was re-elected with an even bigger mandate.

In 2021, Modi completed twenty continuous years as the head of a government. This book, a compilation of chapters authored by eminent intellectuals and domain experts, attempts a definitive and expansive exploration into the fundamental transformation of Gujarat and India over the last twenty years due to Modi’s unique model of governance.