Someone approaches Keshav with a case that the police consider a hopeless one. Will he be able to crack it with his best friend, Saurabh?

Keshav is desperately trying to focus on his IPS exams when a case comes to him. It is as distracting as Alia, the woman who tells him that her daughter has been missing for nine months. The police consider it a cold case, as do her in-laws and husband, but Alia refuses to give up―she is determined to find her daughter.

As Keshav―with Saurabh’s help―tries to crack what happened all that time ago, he finds himself increasingly drawn to Alia, and her younger daughter. Another unputdownable thriller from India’s highest-selling author. 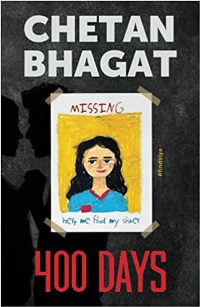 Be the first to review “400 Days” Cancel reply